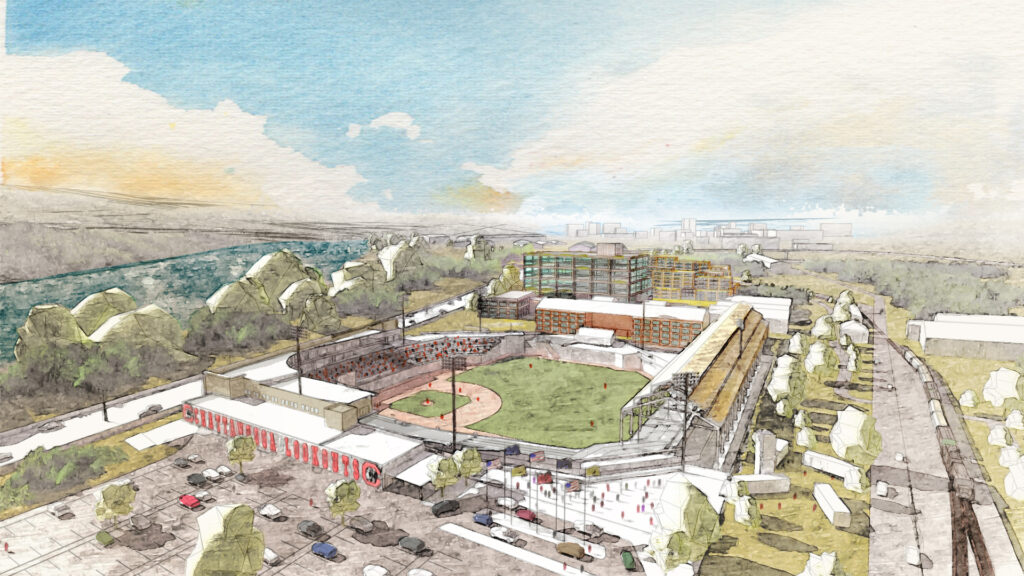 More than 100 acres of the long-neglected U.S. Pipe and Wheland Foundry sites will begin transforming into a world-class live-work-play district that will generate more than $40 million for schools, Hamilton County Mayor Jim Coppinger and Chattanooga Mayor Tim Kelly announced on Thursday.

Flanked by nationally renowned master developer Jim Irwin of New City Properties, Coppinger and Kelly detailed a public-private partnership that will allow a long-planned revitalization of the blighted site — which is expected to generate more than $1 billion in private investment — to begin in earnest.

The process for revitalizing the South Broad district began in 2003 and continued under several City and County Administrations. In 2017, The Chattanooga Design Studio, an independent non-profit community design resource, began a planning study of the South Broad District, which includes more than 400 acres just south of Downtown Chattanooga.

The purpose of the study was to develop a realistic, long term vision for the revitalization of the district. This vision was developed through a public-participatory planning process that involved hundreds of residents during the summer and fall of 2017.

In the years since, planners have used the South Broad District Study as a blueprint for reimagining this historic site into a space where anyone can live, work, shop, dine, and recreate.

“After years of studies and non-starters, The City, the County, and the State are coming together with the ownership group and a world-renowned master developer to transform this site into a vibrant new community where economic opportunity and quality of life come together,” Chattanooga Mayor Tim kelly said.

This once-in-a generation opportunity to spur the revitalization of the entire South Broad District will be accomplished by redeveloping — and in some places restoring — 140 acres of the dilapidated Wheland Foundry and U.S. Pipe sites to create a vibrant live-work-play mixed use neighborhood. The ultimate investment in the project is expected to exceed $1 billion, providing tremendous value for residents of our region for decades to come.

The city and county will each contribute $1.5 million to the construction of the multi-use stadium, together about 4% of the cost. Using conservative projections, the surrounding new development will generate more than $40 million in new funding for education, of more than $90 million will be generated in total new tax revenue for the city and county.

By comparison, a similar project in Fort Wayne, Indiana, reached $1 billion of new development in 13 years. And a recent project in Columbia, South Carolina — similar in  size to the Chattanooga site — notched $650 million in six years, and is expected to exceed $1.2 billion at full build out.

The remainder of the funding for the stadium – 96% — will come from the project itself, including tax payments from private property owners and developers, and via payments generated by the new multi-use stadium.

The Lookouts’ owners will pay $1 million in rent per year, higher than any other team in Minor League Baseball, and nearly three times the rent paid by the Tennessee Titans at Nissan Stadium. In addition to rent, the Lookouts will pay for all operations and regular maintenance for 30 years, projected to be $45 million over that period.